Since it’s internet law that all podcasts and blogs devote this week to analyzing and scrutinizing the finale of Breaking Bad, while ignoring the multitudes of other television shows and movies that might be worthy of even a fraction of its attention, we’ve decided to  throw our black porkpie hat in the ring and join the discussion. We chat about the finale, “Felina” as well as our thoughts on the show as a whole. We’ll be back on Thursday with a new show about some old movie people don’t Google as much as they do Breaking Bad.

SPOILER ALERT: This episode talks about the whole damn show! Why would you listen to it if you haven’t seen everything?

With the series finale of Breaking Bad airing tomorrow night, it seems like an appropriate time to question: why do people love this show so damn much? Sure it’s superbly crafted and acted, but for me personally, there’s always been some facet of Breaking Bad that is sympathetic and engaging, even when the characters are behaving in a way that, rationally, should elicit anything but.

The answer: It all boils down to Super-Heroes.

Breaking Bad essentially functions as an inverted Super-Hero story. Think of it as a dark reflection of your favourite hero’s origin story. While it broadly identifies with many comic book themes, for the sake of a more narrow comparison, let’s specifically contrast the story of Walter White with that of Batman.

First of all, the most resonant and apparent Super-Hero trope that is engrained in the Breaking Bad narrative is that of the Secret Identity. 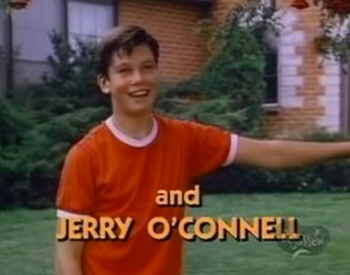 Walter White doesn’t just start cooking meth, like Bruce Wayne he creates an alter-ego: Heisenberg. His alter-ego has a costume (black hat, sunglasses), and the same super-powers as Batman (the power of science!). Watch any scene from the first couple of seasons of Breaking Bad where Walt is lying to Skyler– now watch any scene where Clark Kent lies to Lois Lane, or Bruce Wayne has to slip out of a party. It plays very similarly. As audience members, we know that he’s dashing off to a violent, life-threatening adventure. This creates tension, and a secret between the character of Walt and the audience.

Remember, no one got to see Batman enter the Batcave, or Clark Kent take off his clothes in a phone booth other than us, the readers.

Sure, Walt is a scumbag. That’s why it is an inversion of the Super-Hero narrative– nevertheless, we want him to trick Skyler, we want him to go off and be Heisenberg. While it may contradict our moral foundations as human beings, as consumers of stories, we’ve come to be complicit in, and ultimately embrace, the preservation of the secret identity. This goes all the way back to Zorro and before him, the Scarlet Pimpernel (or so Antonio Banderas and Wikipedia tell me, respectively).

Sadly, Zorro made the mistake of publicly stating that his girlfriend’s vagina gave him cancer.

Like Bruce Wayne, we get the sense that Walter is being most true to himself when he is the destructive Heisenberg. In later seasons, when he dons Walter White’s clothes, and acts befuddled and useless, it plays almost  exactly the same as when Bruce Wayne acts like a big douchebag. “Walter White” becomes the disguise.

While Bruce Wayne was transformed into Batman by the death of his parents, Breaking Bad gives a similar origin story born out of tragedy– but in this inversion of the story, Walt selfishly transforms himself after being diagnosed with terminal lung cancer. It’s not about others, it’s about him. It’s not about sacrifice, it’s about indulgence. Despite the fact that Walt purports to be helping his family (and in that way, he sees himself as something of a hero) over the course of the show we realize that his dark side just needed an excuse to be coaxed out. Breaking Bad becomes kind of like that evil Mirror Universe from Star Trek. 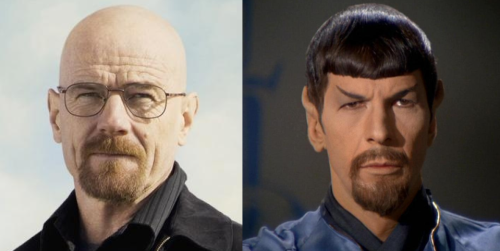 Walt even has the Evil Mirror Universe goatee.

Another Super-Hero trope that forms the very building blocks of Breaking Bad is that of the sidekick. Every Batman has his Robin, and Walt has Jesse Pinkman. Their relationship is so Batman and Robiny, it wouldn’t seem weird for Walt to call Jesse “old chum”.

Except Walt and Jesse have way worse posture.

Seeing Jesse’s happiness degrade as his morality becomes increasingly compromised, may even be a more realistic interpretation of the hero-sidekick relationship– how happy would you be if you were Robin and you eventually realized that you’d spent what should have been an innocent childhood assaulting criminals and living in a cave? You would probably freak out, blame Batman, and partner up with Harvey Bullock, or whoever the Batman equivelent of Hank is.

Also like Batman, Walt has his rogues gallery of villains, from the bell-ringing Hector, to crazy Tuco, to Gus Fring who literally becomes Two-Face at the end of season four.

And it doesn’t get much more Batcavey than the Superlab, the subterranean dwelling filled with beakers and other super-sciencey things that you access via a secret passage. They may as well have included a giant penny and a dinosaur.

What makes Breaking Bad clever is they take a familiar story, a good person’s descent into evil, and tell it through the structure of the Super-Hero narrative. Breaking Bad evokes feelings and plotpoints from our modern adventure mythology then warps them into a darker, more morally ambiguous story.

Of course there’s a lot of pop-culture mythology stirred into the pot of this show; the show can emulate everything from a John Ford Western, to The Godfather, to Seinfeld. But think about this– the show’s creator Vince Gilligan, co-wrote the movie Hancock, a script that was conceived as a darker, morally ambiguous Super-Hero story. While that movie suffered from multiple re-writes and studio edits, never fully capitalizing on its intriguing premise, Breaking Bad, which came out the same year as Hancock, could be seen as a richer more realistic reworking of some of these same themes, albeit in a broader, less literal sense. Also, no Will Smith.

“I was thinking, for Hancock 2, maybe Hancock has a son around Jaden’s age…”

A quick Google search reveals that other bloggers have come to this same conclusion (here, here, and here, for example). Clearly this not a unique observation, this is something that a lot of people feel about this show. But what’s interesting is, with TV shows now beginning to directly emulate comic books and comic book movies (Arrow, Marvel’s Agents of SHIELD, the newly announced Gotham), will any of them manage to top or even match the intensity and quality of Breaking Bad? It manages to hit all the right buttons, in terms of building a Super-Hero mythology, but because it never needs to service any original source material, it’s free to tell a wholly original story.

Coupled with the fact that there haven’t been any truly great Super-Hero TV shows (sure, people like Smallville and Lois & Clark, but come on), will any show ever top Breaking Bad in its telling of a Super-Hero story, as repurposed as it may be? For a while, at least, it will be the best.

Schwarzenegger vs Farrell, Stone vs Beckinsale, Cox vs Cranston, a little mutant puppet man vs Bill Nighy– we stack the new 2012 version of Total Recall against a fresh viewing of the original 1990 film. Does the original hold up? Does the remake match or even exceed its predecessor?  Why have they never made a version of Total Recall that doesn’t star a cast member of Breaking Bad? How badly do you feel for that guy Quaid uses as a human shield? What happened to Mars? Seriously, did someone making the new Total Recall just space out, fuck up, and forget that the movie is supposed to be about going to Mars? Ah, forget it, I’ll be in the car…

Also, if you haven’t seen any of Schwarzenegger’s commentary/oversimplified description on the Total Recall DVD— you haven’t lived.

Ever wondered what would happen if your high-school teachers were replaced by aliens… Ever wondered what would happen if the guy who wrote Scream collaborated with the guy who directed Desperado for a loose remake of Invasion of the Body Snatchers… Ever wondered what would happen if we re-watched The Faculty and recorded a podcast about it… Yes, The Faculty! Robert Rodriguez and Kevin Williamson’s 1998 teen sci-fi thriller that makes The Breakfast Club look like, well… like someone took the characters from The Breakfast Club and put them in a 1998 sci-fi thriller. Does the movie work today? Is Josh “Pearl Harbour” Hartnett charming, or just squinty? What parallels are there between this teen flick and the acclaimed TV series Breaking Bad? Whatever happened to that Jon Stewart guy? Joined by Alexandra West, who writes the horror blog Scare Tactic, we answer these questions and more!