Casting of Ben Affleck “Offensive” Because Real-Life Batman was Latino 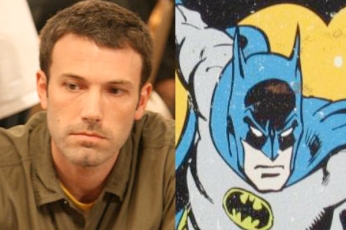 The news that Ben Affleck would play Batman in a new Batman/Superman movie has elicited a multitude of responses, including many negative ones. While some feel that he is altogether not right for the part, others wonder if he can overcome the stigma of some of his earlier roles, such as the failed comic book adaptation Daredevil. What is most troubling about this decision, however, is that it is indicative of a disturbingly frequent trend in Hollywood films: Whitewashing.

The character Affleck is set to play, Batman, is the alter-ego of billionaire Bruce Wayne, a man of Hispanic descent, whose real family name was Vasquez. The Waynes changed their last name upon emigrating to Gotham City from Tampico, Mexico years before Bruce was born.

Ben Affleck had this to say:

“…you know you wouldn’t necessarily select him out of a line of ten people and go ‘This guy’s Latino.’ So I didn’t feel as though I was violating some thing, where, here’s this guy who’s clearly ethnic in some way and it’s sort of being whitewashed by Ben Affleck the actor.”

While the charge of whitewashing remains in dispute, another controversy plagues the production. It seems Affleck’s character, Batman, may not have been responsible for all of the accomplishments the film’s script purports him to have made. Even Police Commissioner James Gordon admits that many of the events depicted in the screenplay for Batman vs. Superman happened, not to Batman, but to Tom Evans, AKA Captain Canuck.

Gordon calls Evans the “true hero”, and suggests that the re-appropriation of Captain Canuck’s life’s work into a Batman film was done in the service of crafting a story more palatable for American audiences, who mainly just like to see Americans doing American things, even when they didn’t actually happen that way.

Batman vs. Superman to Film in Toronto: What Does That Mean for the City? 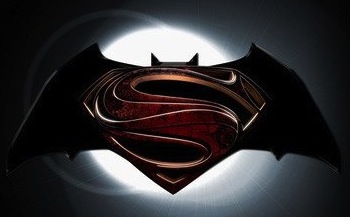 A lot of movies are filmed here in Toronto– from this year’s Pacific Rim, to the Oscar-Winning documentary about Richard Gere’s inability to sing, Chicago. Still, I can think of no movie I am more excited to welcome here than the new Batman/Superman movie. The only super-hero movies shot in Toronto in recent years have been the disappointing non-Ang Lee Hulk movie, and the admittedly fun Kick-Ass. But to have my childhood heroes Batman and Superman come to town is a pretty big deal, although is does raise one important question: where does the movie take place? Metropolis or Gotham City?

The Dark Knight took a more realistic approach to Gotham City, shooting in Chicago, and eventually Pittsburgh for The Dark Knight Rises, the Adam West Batman series was shot in Los Angeles, and I believe Batman Returns was filmed in a snow-globe inside of Tim Burton’s brain. Conversely, Metropolis has been less distinctively identified on screen– in the Christopher Reeve movies, they make no effort to distinguish Metropolis from New York, even featuring the World Trade towers on the poster for Superman II. Superman Returns made an attempt to portray Metropolis, specifically the Daily Planet offices, as a stylized art deco location, calling back to Superman’s 1930s roots. The TV series Lois and Clark tried the same thing, albeit with a lot more neon because, you know, it was the early ’90s. More recently, in Man of Steel, Metropolis is envisioned as a smoldering pile of corpses and rubble… *cough*

Metropolis and Gotham City have always been twisted reflections of each other, and of their respective characters– Metropolis a bright, gleaming testament to the successes of Western modernity, and Gotham a monument to urban decay. One is mostly seen in the day, the other, at night.

So which city will Toronto be? If the movie takes place in Metropolis, that would be fitting– Superman co-creator and artist Joe Shuster based his vision of Metropolis on Toronto, his home town. According to Shuster: “Cleveland was not nearly as metropolitan as Toronto was, and it was not as big or as beautiful. Whatever buildings I saw in Toronto remained in my mind and came out in the form of Metropolis… As I realized later on, Toronto is a much more beautiful city than Cleveland ever was…” Even The Daily Planet was originally called “The Daily Star” named after The Toronto Star, where Shuster worked as a paperboy. 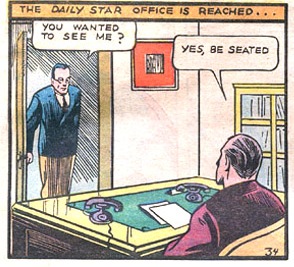 Shuster even modeled the Daily Planet building off of the Toronto Star’s (Then known as the “Toronto Daily Star”) old headquarters. 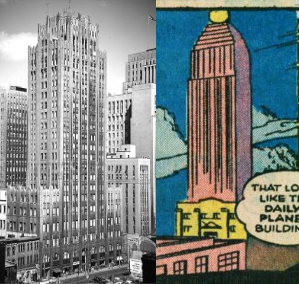 On the other hand, Toronto’s changed a lot since the ’30s, and today it may more closely resemble Gotham City. Recently, the Toronto Police fatally shot an eighteen-year-old offender armed only with a knife nine times. Nine times! That sounds like something Commissioner Gordon would take issue with, and then one of the cops would be all like, “Lighten up Gordon!” and then they’d all laugh at him. Or take Toronto’s Mayor, Rob Ford, who allegedly was videotaped smoking crack. He would be a great Gotham mayor! Someone to make The Penguin look like more of a viable Mayoral candidate.

Of course, Toronto’s seedy underbelly or its history with Superman are probably not on the filmmakers’ radar, they’re making this movie in Toronto for the same reason everyone does: it’s cheap! It’ll probably all be green-screened anyway…

UPDATE: Despite numerous reports (like here, here or here) it now appears Batman vs. Superman will be shot in Detroit. The move was made after the casting of Batman, presumably because Detroit will be standing-in for Boston where Batman will live in the new movie.

In anticipation of Zack Snyder’s Man of Steel (which is presumably a prequel to the Shaquille O’Neal film) we’ve decided to devote our 100th episode to the Superman film franchise– we rewatched Superman, Superman II, Superman III, Superman IV: The Quest for Peace, and Superman Returns. It was exhausting.

Join us for this epic assessment of one of pop-culture’s most enduring characters, from Marlon Brando’s apathetic albino interpretation Jor-El, to solar-powered, half-naked Aryan body-builders, to magic Kryptonian kisses that work like ruffies. YOU’LL BELIEVE THREE MEN CAN SIT MOTIONLESS IN A ROOM AND TALK ABOUT MOVIES.

Thanks to all of our listeners for helping us get to 100 episodes! Also, check out the new episode of the Time Bandits podcast, on which JM appears… and while you’re at it, the website Do You Remember recently interviewed JM about the show.

On this very special episode, we count down our Top 5 favourite Canadian Heritage Minutes. Ever since they first started appearing in 1991, the Canadian Heritage Minutes have captured our Nation’s collective imagination. From Winnie the Pooh’s tangential association to Canada, to Dr. Penfield’s brain-poking, we learned about Canadian history in its ideal format: 60-second bursts that give you the gist of the story while you’re waiting for something better to come on.

Learn— the secret dark origin of basketball, Marshall McLuhan’s connection to the X-Men, which Heritage Minute should be played before every screening of Man of Steel, and more!

Episode 28- Lois and Clark: The New Adventures of Superman

The year was 1993– America was ready for a new breed of superhero: one with more “will they/won’t they” sexual tension, and who prefers whimsical banter to big action scenes. Enter Teri Hatcher and Dean Cain as Lois and Clark, respectively, in Lois and Clark: The New Adventures of Superman, ABC’s prime-time superhero soap. Initially a ratings hit, audience disinterest proved to be the show’s Kryptonite, and it was unceremoniously canceled after only four seasons. Now 20 years later, we pay a visit to the Metropolis of our youth– does Lois and Clark hold up? Is Lois Lane the most galactically stupid woman in history? Why does Lex Luthor look like Bill Nye the Science Guy? We answer these questions and more!

Episode 28- Lois and Clark: The New Adventures of Superman